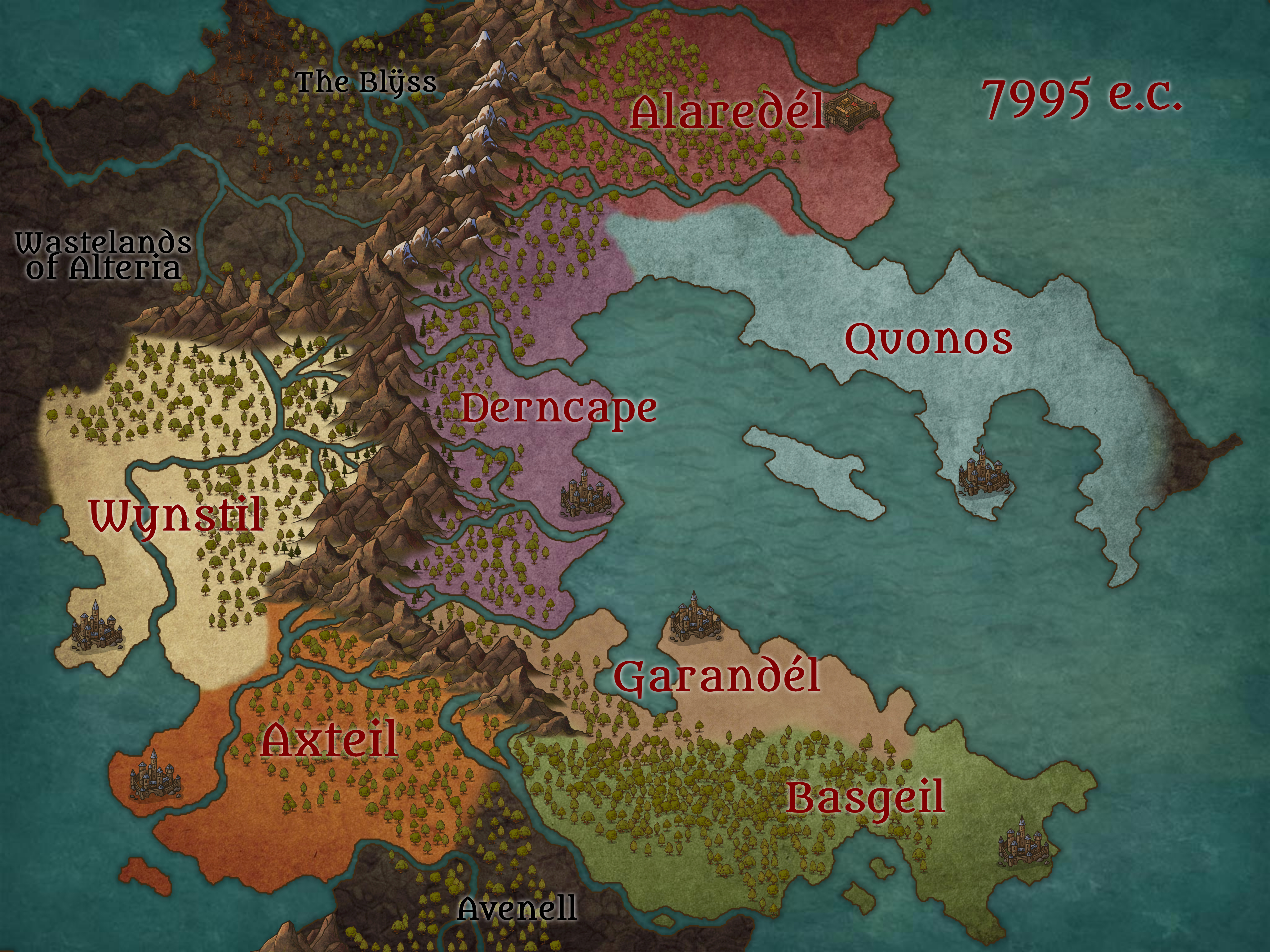 A majestic and ancient city built upon the ruins of many cultures. The ruling family is from an ancient line of druids that once roamed the Krebem Woodlands from Alaredél to the Shadow Mountains to the west. The current ruler is Duke Angaidh Dùghlasach. This stoic ruler is quietly feared by many of the other Dukes of Esteparon. He has built few alliances among the dukedoms, but his warriors are fearless and savage in battle.

The newest Dukedom, Derncape is still finding itself and its voice among the nobles of Esteparon. Derncape is an industrial port city located on the border between the human and dwarvish kingdoms and is ruled by the just hand of Lord Fanelwen. Securing the trade routes between his city and the nearest trading partners is his greatest concern.

Duke Eignach Ó Daimhín is the current ruler of Quonos. A good and fair ruler, he seeks to bring prosperity to his people and protect them from the growing, dark threat of the necropolis under Firsthaven.

Zylstra is 77th Hazard of Evocation in the Quonos line of Hazards, the heir to the seat of the Evokers following the sacking of Firsthaven.

Originally built as a naval stronghold, this city has patrolled the central Rynin Sea being ever vigilant of the rising threat of Leyrtisian Empire. The current Duke of Basgeil is Abelardô Vitellius, who succeeded his aunt, Kassia Vitellius, who died without an heir. For three years, Basgeil was ruled by a senate of the elite families of the city. Finally, Abelardô returned to Basgeil having sailed for five years in the Rynin Sea.

A smaller duchy, Garandél is continually squeezed between the naval superiority of Basgeil and the ambitious Duke of Derncape. It has developed a series fo trade agreements with the dwarven kingdoms under the Shadow Mountains and the Duchy of Quonos.

The glorious southern stronghold is built from the blood marble of the Shadow Mountains along the Alterian Sea. The elderly ruler of this Dukedom is Duke Marcus Trebellius. His strongest allies are Duke Tygard II of Wynstil and the Stratocracy of Avenell. The walls of this city have withstood all assailants since its founding over 3,000 years ago. Derdarian Kagurkh is the 19th Hazard of Axteil. A hobgoblin of noble stature, his cousin is the Marshall of the Stratocracy of Avenell.

The City of the Night, Wynstil, is led by the young Duke Tygardi II. On the edge of the Alterian Wastelands, the city was home to hardened noble houses bred to defend Esteparon against the aggression of the tribal barbarians to the west of the Shadow Mountains.

A small village at the intersecton of the Northern Road and the Kings Road, Crossroads has remained an independent city since the fall of the Kingdom of Esteparon.

During the height of the Kingdom of Esteparon, Pyrae was a growing port town on the coast along the Rynin Sea. By the time it had grown to be the largest port of call, Pyrae had developed it’s own garrison made of outcasts and lower noble’s whose prospects within the Kingdom were limited.

Following the downfall of the Kingdom of Esteparon, the Duke’s negotiated and signed a treaty establishing five dukedoms, and eventually added a sixth, Derncape, in 7134 E.C. As part of the treaty, the they agreed that each Duke would have sovereign rule over their individual lands and that no Duke would claim the title of King of Esteparon. Dukes and Duchesses are referred to by their formal title by others in the peerage while vassals and serfs would call them ‘your Grace’.

During the time of the Kingdom, the lands were broken up into many counties and baronies with the barons swearing fealty directly to the King while Counts swore fealty to a Duke, who in turn swore fealty to the King. Following the downfall of the Kingdom, the nobility fought to align themselves, with the various noble men and women swearing fealty to a Duke or perhaps to another nobility. At that time, several Counts heritage were given the title Marquis as their lands were bordering hostile lands and they were given additional royal armies directly from the Dukes. In current times, Counts, Earls and Barons are all hereditary titles that come with a land grant. These nobility are part of the peerage.

Baronets and Knights are titles granted to the person that are not hereditary and do not grant lands.