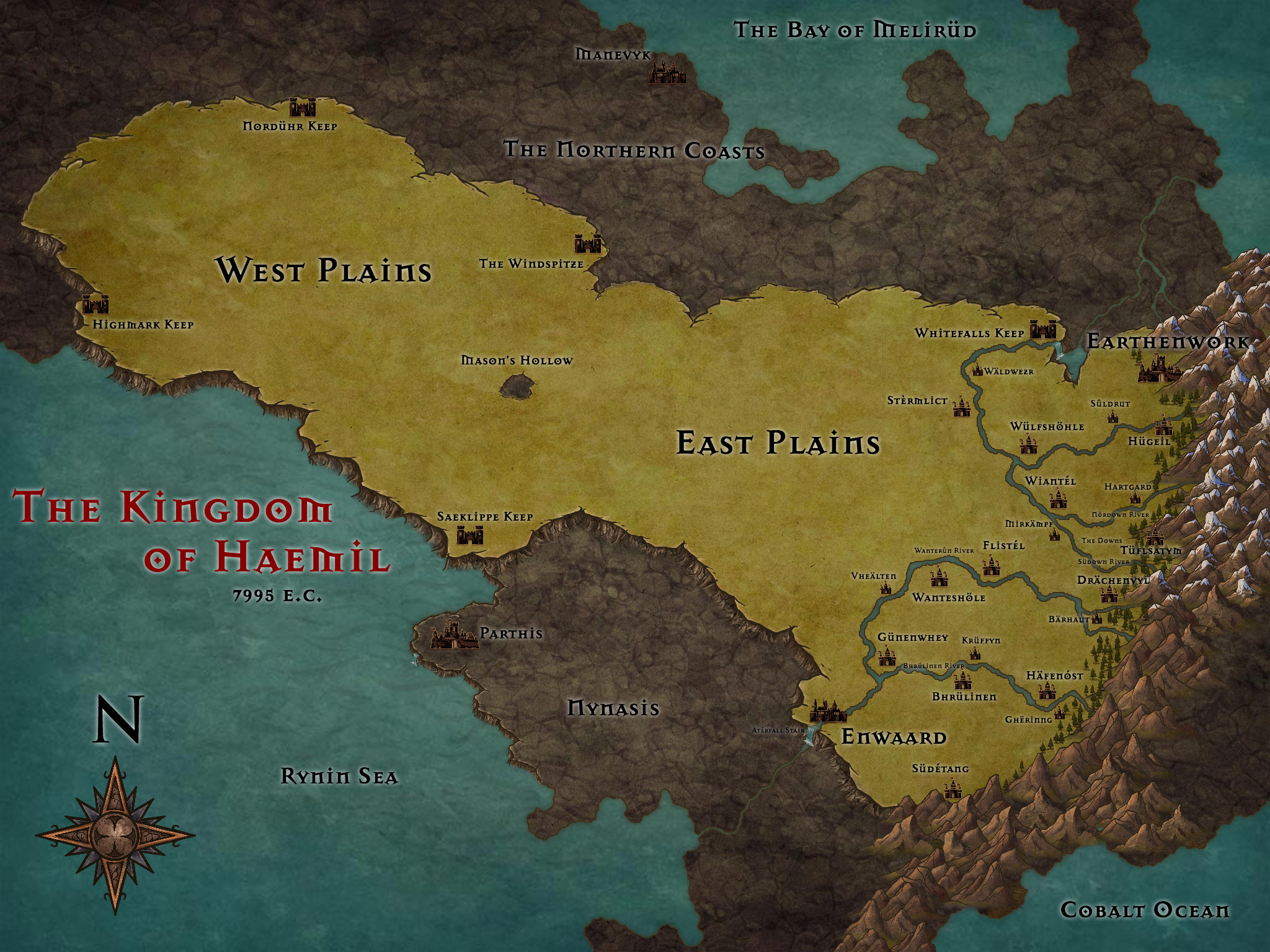 The Kingdom of Haemil is an absolute monarchy set upon the Plains of Haemil, the plateaued plains of the north leading to the foothills of the Iron Mountains. The ancient city of Earthenwork, with its stone walls carved directly from the mountains that surrounds, is the capital of the kingdom. Legendarily, Earthenwork was built by the gods with Calledrym said to have established it as his stronghold during the Godling Wars. The sheer granite walls of the fortress are seven hundred feet high and over one hundred feet thick. Two massive doors of oak bound by iron stand ready to seal the city off from the rest of the world. Three dynasties of Kings have ruled since the doors were last drawn closed as no one has dared to march upon the city in ages.

Within the city the structures are grand and elegant if not intimidating. The city is divided by the Cliffs of Gowhærn. These cliffs are more than three hundred feet high. A raging river carves through the upper city and flows over the cliffs in multiple places, disappearing into the ravine between the two tiers in a cloud of cool mist. Several gnome-tinkered platforms that raise and lower to allow access to the upper city. A magnificent tower built into the divide between the Lower City and the Upper City is the seat of the Hazard of Haemil.

The Timeline of the Kingdom of Haemil

It is a magnificent city governed by a half-elven king. A working class of gnomes and halflings live in abundance there as well. Elves and dwarves are regarded with guarded suspicion as they are rare. Haemil has a large calvary that patrols the upper plains to the west of the mountains for several hundred miles. There are small outposts for these patrols to inhabit as they guard the kingdom, but are otherwise unmanned. Along the edges of the plateau five massive keeps have been built and manned by the people of Haemil for many thousands of years.

This kingdom is dominated by the clan of humans known as the Aertens. A very small nobility interbred with elves during and just following the Godling wars making the entire nobility half-elven. The majority of commoners are pure human. Lore would suggest that the Kings of Haemil were imbued the essence of a godling during the wars, granting them long life. The kingdom and its nobility is very benevolent and has strong support from the commoners. They have virtually no naval power but massive standing armies with their cavalry being renowned amongst the mortals.

The Kingdom is an absolute monarchy, currently ruled by the Helluddar Krögen XIX. The Krögen-line has ruled Haemil for 347 years.

The nobles of Haemil are blessed with having elven blood within their family lines. All nobles look very much human, however, half-elves have received “the gift”. The line of succession to the crown is the eldest living heir with “the gift”. If no heir, then it goes back to brothers and sisters of the crown, etc. At times, the crown has skipped sons and daughters of the King/Queen and gone to a cousin or aunt/uncle or even further. Detailed records of all the noble lines are kept in Haemil.

Succession Line to the Throne

Five Keeps and Enwaard guard the major entry points into Haemil. The King grants the title of Margrave to five military and political commanders, who are charged with the defenses of the Keeps. They serve at the pleasure of the King and do not pass title to they heirs. Similarly, the captains and other greater officers in the calvary and infantry are given land grants for use of smaller estates near the keep from which they are based. These land grants go with the rank, and therefore are not hereditary either.

A Viceroy is appointed by the King to rule in his stead in Enwaard, although his power is limited to control of the city’s guard called the The City Command and presiding over the Courts of the King’s Law. The leaders of the many churches in the city, make up the Apostlistic Ministry who operate the city’s infrastructure and rule upon the King’s Law and administer the Courts of Justice.

Land grants in the fertile, river lands include Graves who rule of large areas to collect taxes and raise armies to defend the outer Keeps and the Barons who are given minor estates. Knights are also often given minor estates within Earthenwork or near the Keep which they protect. The highest ranking Grave has dominion over the Downs, a large swath of the river lands where the Kings and other nobility have traditionally been buried.

The gold crowns of Haemil are the official mint of coins in the realm. Rarely will a merchant taking precious metals not minted by the crown, although the treasury in Haemil will trade foreign gold for properly minted coins with a slight tax.

The plentiful ores in the iron mountains allow for significant arms and armor manufacturing. Mail is prevalently available for sale, but plate armors are tightly regulated and only for sale to papered knights or nobility. Weaponmaking is similarly regulated with smiths given licenses by the crown. However, if they are in the employ of a noble, they are permitted to make double edged swords or lances for the noble’s use. Axes and bows are regularly made by other smiths and can be found throughout the lands.

Food is plentiful and relatively inexpensive in Haemil. Beers and Meade can be readily found, while wine is at a premium as it is mainly imported from other lands.

The royal armies divided between cavalry, infantry at the keeps and the city command.

The calvary is split into six units, each led by a Captain. Each calvary unit is assigned to a specific borderlands keep. They are charged with guarding and patrolling the Plains of Haemil surrounding that keep. They are equipped with riders plate and shields, and wield long spears from horseback. Once in close quarters, they will draw long sword and/or daggers.

Infantry is similarly divided into five division each assigned to man one of the borderlands keep. Officers are typically wearing either riders plate, plate mail or simply a breast plate. Lower ranks tend to wear chainmail. They are armed with longspears, longswords, and hand axes called a franseca. While fighting in formation they will use her longspears. When formations are broken, they will typically throw their axe and then engage in melee with their swords. A subdivision of the infantry are the Rangers you’re trained specifically with the longbow. These elite units are assigned to the walls of Earthenwork.

The streets of Earthenwork is chiefly manned by the City Command. It is mainly comprised of infantry that guard the walls, patrol the city streets.

Church of the Tempest Eternal

The dominant religion in Earthenwork dedicated to the king of the gods, Calledrym, the Whispering Wind.

Temple of the First Light

A network of churches found in most major cities of the known world. They are governed by a conclave of clerics dedicated to Teysura. The Temple in Earthenwork is led by its High Priestess, Becah Tyuyvord.

Earthenwork, with its stone walls carved directly from the mountains that surrounds, is the capital city.

Cälaturrim, the Tower of Conjuration

A small fortified outpost along the western cliffs on the Plain of Haemil.

A fortified castle along the northern border of the Kingdom of Haemil.

The castle at Bhrülinen is built upon the hillsides above the roaring river bearing the same name.

The sprawling complex of towers and keeps is the First Home of the Aertens. Following his abdication of the throne, Michael Krögen was named the Grave of Häfenóst and settled their with his bride and young daughter.

This elegant castle is often used as a home for elder royalty in the line of succession, but not a member of the royal family. Leonhaerd Krögen, younger brother to the King is the current Grave.

This Barony was picturesque with a small keep surround by rolling fields of grains and flowers. Baron Clovis Rühle’s family was elevated to nobility by the King Helluddar Krögen XVIII, following the reclaiming of the throne by the Krögen family.

The Mason’s Hollow is a sinkhole in the upper plains of Haemil that is just over 1/2 mile in diameter at the surface. The bottom of the sinkhole is approximately 5,000 feet deep, although there are numerous ledges in the bottom half of the sink hole. Much of hte ground water of the plateau drains into the sink hole, forming an underground river that bursts from the seaside cliffs at Parthis.

Return to Haemil
Return to the Realms
Main Page