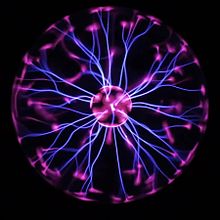 Beyond the confines of the known world, is the Cosmos, or to some people the Great Beyond. The Cosmos is made of many different planes, each of which is their own universe with its own natural laws. Conceptually, the Cosmos is a simplified and fictional interpretation of quantum physics as they relate to our existence; specifically, that thought, energy and matter are all related and interchangeable. The Void is the manifestation of thought and souls. The Ether is pure energy that was originally created by the gods and is continually replenished by mortals. Finally, the Material Plane is, of course, physical matter.

The Planes of Existence

At the center of the cosmos, is the Material Plane. The Material Plane is energy turned into matter. It consists of the sun, moons and Æustëra, the Known World. Surrounding the Material Plane is the Ether, a boundless source of both positive and negative energy. Originally, it was the thoughts of the Ealintaine that formed the energy of the Ether. Later, it is thoughts and prayers of the mortals that have continually replenished it. Upon the Material Plane, magic is the process of using the Temporal Wave to affect the Ether causing a fantastical result. Beyond the Ether resides the Void, a unimaginable vastness of timeless thought to be where the first beings of the Cosmos first gained consciousness. The Void is pure thought and consciousness. It is "being without being”. In the void, individual thoughts took form and became the first Ealintaine. The Realm of Midian is plane that acts as a barrier between the Ether and the Void. Within the Midian, the Ealintaine have been bound by the Magi and are unable to access the Temporal Wave. The Temporal Wave is a conduit between all of the planes. Time exists on the planes within the Temporal wave, but each path across the wave is a alternate timeline. Beings can move between times and even exist in multiple times at once. Consisting of both positive and negative energy, the Temporal Wave is a transitive plane made of the infinite cascades of time and possibility that interconnects the Void, the Ether, the Primal Planes and the Material Plane. The Plane of Shadows is the darkened edges of the Temporal Wave that flows from the void to the material plane. It is a transient plane that touches Midian, the Ether, the Primal Planes and the Material Plane.

The Effect of Time in the Planes

The Temporal Wave can also be thought of as ripples through the space/time continuum. Every decision a mortal makes causes a small ripple and change to the waves of time. So, every decision creates an alternate timeline. Every mortal is tethered to their personal timeline with all the decisions they and others make. That mortal is unique among all the other instances of that mortal in the alternate timelines that were affected by different decisions. Yet, in the Material Plane, the mortal can only exist in one timeline.

The Plane of Shadow is different. Grahlithe was not powerful or capable of creating the plane in a stable manner, like the Divinium. On his plane, the convergence of the waves is too chaotic. It becomes too simple to slide between timelines and get lost. Within the Plane of Shadow, time keeps splitting with each decision, and a mortal would be pulled between multiple timelines, feeling her soul splitting with them. The longer she’s there, the more she splits and sees incorporeal reflections of herself moving and acting, like a silhouette of herself walking in another direction. The mortal would soon find themselves lost in a see of reflections.

The Avatars were the temporal manifestations of Ealintaine in the Material Plane. Celestri was the first to take the form of an Avatar, but she only imparts her dominion over the seas, taking the form of water. When Gaeruhn and Kiravor first to learned the secret of the Avatars, they returned from the Void and descended upon the world. Their arrival as Avatars began the Godling Wars with the first mortal sacrifice to the gods. Lorrynor was the next to come to the world as an Avatar. He manifested himself on the Material Plane as a dragon and taught the Godlings during the wars to take this higher form of thought. He was eventually defeated and consumed by Gaeruhn. Seeing Lorrynor devoured by Gaeruhn, Dasyra was the next to become an Avatar. However, the goddess placed her whole being within the Avatar so that she might have the power to rival the evil brothers of the Divinium. She freed Lorrynor from the belly of Gaeruhn. Taking such form was foolish of Dasyra, and when she was defeated, her consciousness was lost for a time. Selefahn learned of the secret as she escorted the First Sacrifice to the Ether. It was the goddess of the Afterlife that shared the secret of the Avatar to Vra’lithe.

The Binding of the Ether

Following the Godling Wars, Thaedymar took seven of the godlings and instructed them bind the Ether, trapping the Ealintaine within it. However, four of them avoided this celestial prison. Korlez was in hiding upon the Plane of Bone and became trapped there. The mysterious Grahlithe can use his Plane of Shadow as he wills it. Elanil knows the untold ways of the cosmos, and so she can travel with her whims without concern; and Dasyra is aware but bound into the Stars of the Material Plane until her return at the end of days.

The Primal Planes are spatial anomalies within the Ether created when the Divinium used the Temporal Wave to enter the Material Plane. Prior to the binding of the Ether, repetitive use of the Temporal Wave by the Divinium resulted in multiple waves converging and creating the planes. The convergences swelled to create the primal planes of air, earth, fire, water, blood, bone and death. If you think of the Temporal Wave as a bundle of strings that connects the ether to the material plane. Some where along it’s line, it knots … and that is the primal planes.

These seven planes are manifestations of the basic building blocks of the universe. Each is made up of a single type of ethereal energy that overwhelms all others. The natives of a particular Primal Plane are often made of the same energy or element as the plane itself. However, the planes ebb and flow as they meander through the Ether. Often they can warp around each other and become intertwined for a while. It is like the feeling of a cold current in the ocean. Although you might not exist in that current, you felt its effect. Similarly, the different bundles of the Temporal Wave that make up a Primal Plane may influence each other. Where they come close to each other and circle each other, the para-elementals can occur. So, Ice can be found on both the plane of water and the plane of air. Mud is on both water and earth. Magma on earth and fire. Smoke on fire and air.

Demiplanes are generally small, finite dimensions connected to the Ether. They are created when reality is sufficiently warped that small pieces of its substrate fragment and fuse together, thereby creating a stable dimension. These demiplanes can be formed by the workings of powerful magic, be it from an artifact, a powerful mortal spellcaster, or the will of a god. All that is required is for reality to be bent and twisted to the breaking point. The Dreaming, a demiplane created by several of the Godlings to preserve the memories of the First World, is such a place.

However, in some cases, the Demi-plane can be infinitely large with access to many other planes. Such is the case with the Plane of Shadow.

The Dreaming is a demi-plane contiguous with the entirety of the First Lands, the mysterious lands of violent storms and primordial creatures surrounding the Elder Forest and inclusive of some portion of the Iron Mountains. Here the Temporal Wave is set to a single moment in time: the founding of the First Lands. This is related to the stability and seeming stasis of the First Lands. At some point in prehistory it was connected to the Primal Plane of Bone. Now whenever someone of the appropriate ancestry dies, they get shunted here instead of returning to the Ether through the Plane of Bone.

While all of the Ealintaine could directly access the Ether, the leylines became the conduits for other immortals to tap into the Ether and draw upon its energy. Over time, the Immortals began to discover how to access and manipulate the leylines to extract the energies of the Ether. They discovered primal casting forms of Aeromancy, Geomancy, Pyromancy, Hydromancy, Chiromancy, Osteomancy and Necromancy to use the primal elements in the Material Plane to gain direct access to the Ether through its associated Primal Plane. The Magi are the first and most powerful practitioners of this form of magic.

A lattice network of leylines of incredibly variable strength, though usually much weaker than leylines found elsewhere. These leylines interpenetrate the First Lands and the Dream. Instead of allowing power to move between spatial distortions, they connect power bleeding from temporal distortions caused by singular events. The metaphysical “echoes” that reverberate through time from these events carries the power of these leylines. These leylines are spatially centered on natural or artificial phenomenon that some how commemorate the event that originated the event. If these memorials are destroyed than, the leyline “evaporates.” Supposedly, these leylines were first created by Chana, Eye-of-Stars, who subsequently taught the elders of the various peoples of the First Lands how to maintain those that exist and create new ones by memorializing singular events through rituals.

Return to the Main Page