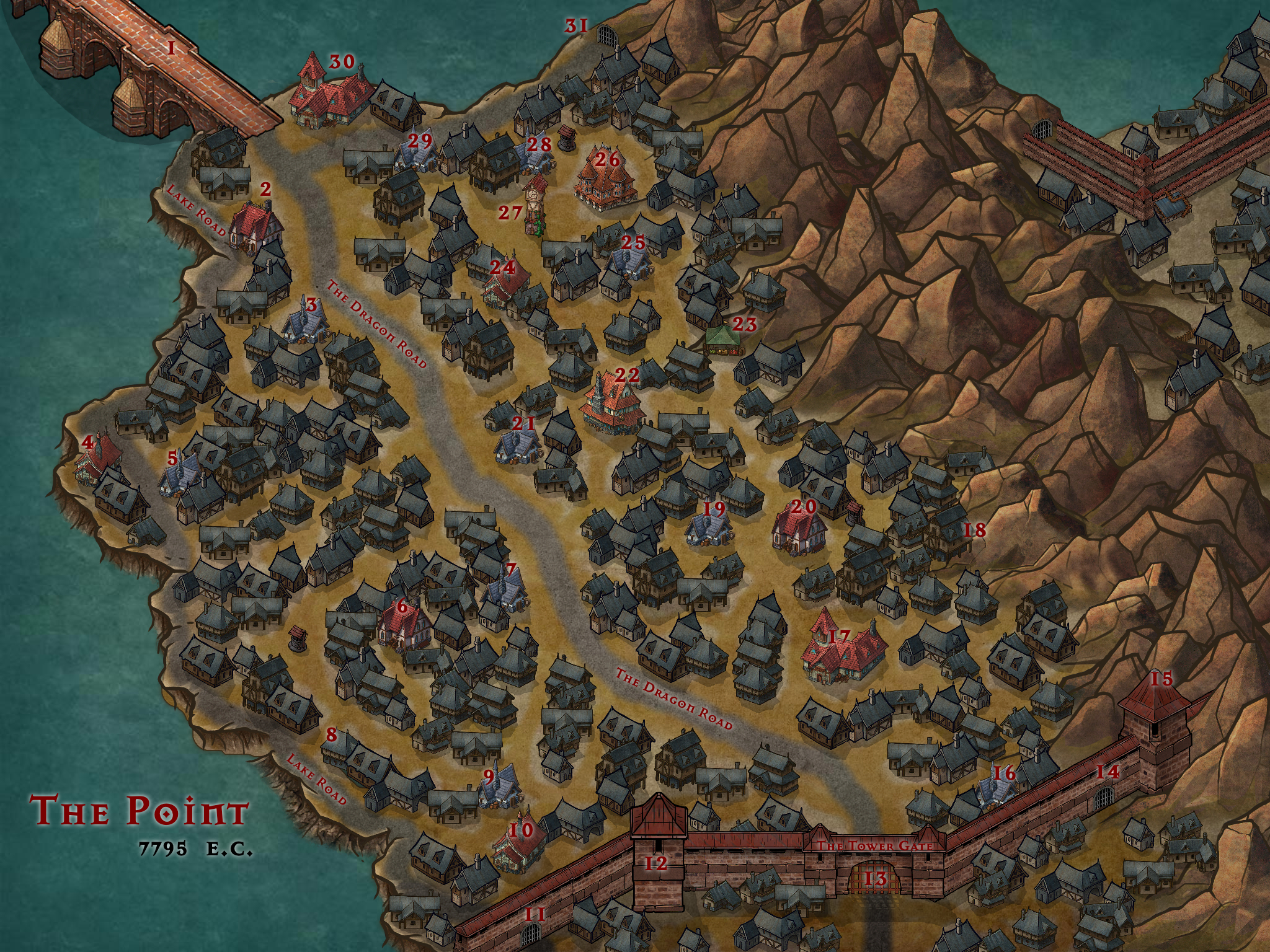 Once a seedy section of town, the Point has ben ‘cleaned up’ on several occasions since the founding the Vale. However, all attempts have retsulted in failure with corruption and crime quickly resurfacing. The Point has burnt on a few occasions; most recently in 7453 E.C.

This multi-leveled bridge houses many of the refugees from Earthenwork. The eastern end of the bridge is the muster point for the retaking of The Point.

This inn was secured by the City Guard on the 16th of Selefis, 7995 E.C. It currently sits vacant.

Once a bustling post stop, this scriviner’s shop appears vacant. The shutters are still open and no noise or lights have been seen since the Shaping.

The famed brewery was known for over a dozen differently styled ales. It was founded by the Gottschäll family from the Freehold of Ennward over a thousand years ago.

The arkwright, Michan Ó Duinnín, is famed chest maker in the Vale. He comes from a long line of craftsman that have lived in the Vale for five generations. A kind hearted old man, he was jovial and welcoming to strangers in the Vale.

An inn known for keeping the doors open throughout the night.

A saddler and malemaker shop.

9. By Hammer and Hand

The oldest blacksmithing emporium in The Point, this shop was acquired by Welmôur Leadtoe in 7967 E.C. The talkative and personable dwarf is well-respected bladesmith and beloved by all who know him.

A blacksmith shop specializing in armor.

Originally built in 2765 E.C., this gate was primarily used by servants and commoners to travel between Oldtown and the Point.

A tower on the Oldtown Wall.

The main northern gate into Oldtown along the Dragon’s Road leading to the Points and the bridge to the Bright Tower.

A gate between Oldtown and The Point opened in 6922 E.C. after a portion of the wall collapsed following a devastating fire.

The tower built following the fire of 6922 E.C. named after the mayor of Oldtown at the time of the construction.

A leatherworker and tanner’s workshop.

The nicest and most popular inn for travelers in The Point.

A seedy tavern known for raunchy parties and fatalities.

A general store operated by Nyco Caihàna, an ambitious twilight elf who came to the Vale less than a decade ago.

The shop of a hobgoblin shoemaker.

A small market of fresh fruits and vegetables produced by the farming coop in the Crescent.

The shop of an expert carpenter.

The largest blacksmith shop in The Point, frequented by most of the residents of The Estates.

The home of the appointed Constable of The Point. Twice the City Guard has sent men to secure the building only to be repelled before they could even enter it.

The bell tower, constructed first in 2355 E.C., has been rebuilt and updated constantly by the gnomes of Kaladrym.

Known for the smell of fresh bread wafting through the district each morning, the bakery was a popular stop for most of the residents of The Point. While the sweet smells have stopped since the Shaping, smoke from the chimney has been seen on several occasions.

This shop was the home of Atsuko, a curt but talented weaver.

This inn was secured by the City Guard on the 16th of Selefis, 7995 E.C. It is currently serving as housing for Cássyon Edelmahn and the City Guard.

The steel gate that leads to The Estates. The gates have been unhinged and broken, requiring significant repair before it can securely close.

by: JohnGrady
See All Pages